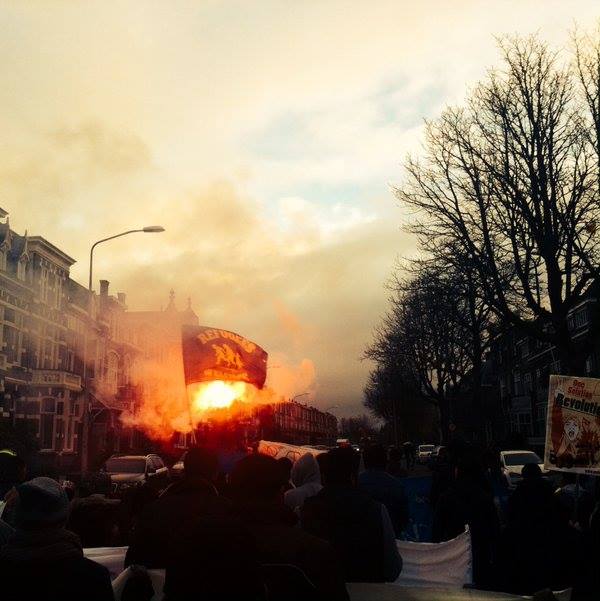 Almost 1000 people joined the Nijmegen Gastvrij demonstration and protest march on Saturday, November 11th, in Nijmegen. Under the theme ‘Nijmegen Gastvrij (Nijmegen is hospitable), solidarity without borders’ we walked, danced, sang,  screamed, and shouted through and around the city centre. At the start as well as at several places along the route we gathered and listened to both planned and spontaneous speeches. Side by side peeps from Eritrea, The Netherlands, Syria, Iraq, Germany, Afghanistan and many other places, not only demanded but also showed solidarity without borders. We are united in the fight against repression, oppression and many more injustices based on what our passport, skin or habits look like. 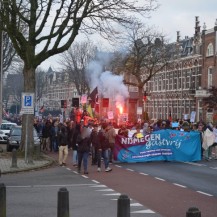 Our demands for open borders, welcoming refugees, abolishing detention centres and treating resettlers with dignity, couldn’t be overheard. Support came from dozens of bystanders along the demonstration. Together we rose our voices against those nurturing xenophobia, racism and institutionalized violence against refugees in our society. At the same time the the demo once again showed us that we are not alone in this fight. When it got dark and rainy we danced our way through the streets until we reached de Klinker where we were welcomed with great food and a warm atmosphere.  Those who where not exhausted after the long walk brought this great atmosphere, that marked the end of the demo, into de Onderbroek, where the doors were open until late. 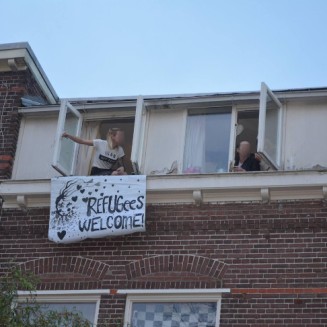 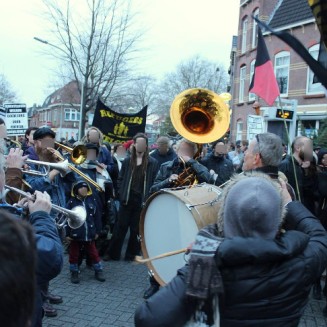 At the end what remains is to thank all the peeps who put a lot of energy and time in organizing the demo. A special thanks also to the we are here group for coming from Amsterdam. Then those that helped bringing people from Heumensoord to the demo and back. Last but not least all the people from Nijmegen and beyond that came to show their support, their solidarity and their voice in our united struggle.

If you want to learn more about the demo you can go to the demo homepage or their facebook where you can find more information, pictures, videos and the texts of the speeches. On the justpeople site more photo’s will follow soon.